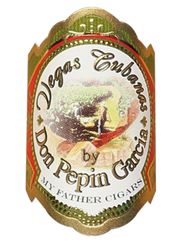 Since José "Don Pepín" García first began crafting cigars in a boutique manner outside of Cuba—setting up a small storefront in Miami's famed "Little Havana" neighborhood in roughly 2003—the Vegas Cubanas brand has existed. While the cigar was indeed among his first personal offerings, Vegas Cubanas was pushed to the back burner by the wider appeal of marcas such as the DPG Original, My Father, and Flor de Las Antillas. However, this did not stop García from retaining a small percentage of his workforce maintaining Vegas Cubanas production over the years.

In 2017, the García family made the decision to return Vegas Cubanas to the limelight, tweaking its look and blend to fall in line with their growing lineup now produced at their acclaimed My Father Cigars S.A. factory located in Estelí, Nicaragua. With the name drawing inspiration from Pepín's home of Cuba (where vegas refer to tobacco farms), Vegas Cubanas pays tribute to Cuban traditions with a Nicaraguan twist. This is evidenced through the cigar's binder/filler, being sourced from the Garcías' now-famous vegas of their own, including leaves harvested from the Estelí and Jalapa regions of Nicaragua. This medium-bodied core is then wrapped in an undisclosed Corojo wrapper that is said to be expertly matured before being rolled over the bunched cigar.

The end result is a classic, everyday experience from one of the world's most acclaimed families of tobacco artisans. Vegas Cubanas is medium in intensity and deep in flavor, showing highlights of earth, cedar, black pepper (a signature of the Garcías), medium-roast coffee, and buttered toast.