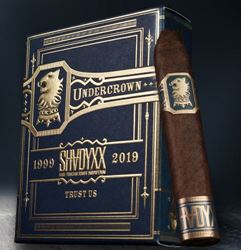 In 2014, Drew Estate surprised the cigar world with an unprecedented collaboration. The cigar was dubbed Undercrown ShadyXV, made to celebrate Shady Records’ (aka the record label founded by Eminem and Paul Rosenberg) 15th anniversary. The cigars featured a tweaked version of the core Undercrown Maduro line and an added foot band to differentiate the cigar from the standard line.

After five years, Drew Estate and Shady Records couldn't resist reviving the project for a second limited-edition run! Introducing the Undercrown ShadyXX, a cigar made in commemoration of Shady Records’ milestone 20th anniversary. The cigar's name may be tweaked, but let us reassure you—everything else remains the same as the OG release!

Undercrown ShadyXX features a unique 5" x 50 semi-box-pressed belicoso format—a shape that looks nearly as good as it smokes. The recipe is built from Nicaraguan and Brazilian fillers, a Connecticut Stalk-Cut Habano binder, and a dark, Mexican San Andrés maduro wrapper. This is a similar recipe to the standard Undercrown Maduro, only the experience has been ramped up through the inclusion of higher-priming leaves in the cigar's filler (similar to the Undercrown Corona ¡Viva! and Undercrown Dojo Dogma blends). The end result is a full-bodied smoke with gobs of flavor from start to finish. Expect a booming smoke output and dense flavors of chocolate, mocha, earth, black pepper, dark vanilla, and a stone fruit sweetness throughout the finish.