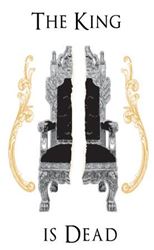 The King is Dead by AJ Fernandez

At the core of the Caldwell Cigar Co. portfolio lies the company's original three brands, collectively known as the Caldwell Collection. This consists of the Eastern Standard, The King is Dead, and Long Live the King. Each of these blends are hand-rolled in the Dominican Republic at the Tabacalera William Ventura factory.

Not one to rest on his laurels, company owner, Robert Caldwell, has since ventured out to introduced collaborative projects such as The T. cigar with Master Blender A.J. Fernández and his famed Tabacalera Fernández factory in Estelí, Nicaragua. During this collaborative effort, A.J. had the chance to smoke through Caldwell's Dominican offerings, inspiring him to reimagine both The King is Dead and Long Live the King cigars with his own Nicaraguan tobaccos, not unlike parody artwork.

Traditionally, The King is Dead uses a Dominican Negrito wrapper, Dominican Corojo binder, and Cuban-seed Dominican fillers. But A.J. riffs on this recipe with all-Nicaraguan leaves, offering the same spirit of the smoking experience from his own interpretation. It's safe to say this is an unheard of concept in the arena of premium cigars—who better to pull it off than A.J. Fernández and Robert Caldwell. Limited in production, the cigars boast a full-bodied profile and flavor characteristics of toasted cedar, mineral-rich earth, buttered toast, nutmeg, and an underlying raisin sweetness.