In 2013, at the top of their game, Tatuaje Cigars released the Tatuaje 10th Anniversary cigar in celebration of just that—the company's milestone 10-year achievement within the cut-throat world of premium cigar craftsmanship.

But where most companies have been known to pull out the big guns on such an occasion—scouring through the tobacco vaults to introduce some sort of heirloom leaf—Tatuaje humbly offered their Seleccion de Cazador "Brown Label" blend in two new sizes. It was the cigar that put Tatuaje on the map, and as they say, don't fix what ain't broke!

Despite being emblazoned with "miami" on the cigar's bands, the 10th Anniversary was rolled at the famed My Father Cigars factory in Estelí; this was instead a nod to Tatuaje's birthplace, where the García family once rolled the cigars in Miami's Little Havana neighborhood. The 10th Anniversary incorporates an Ecuadorian Habano wrapper over all-Nicaraguan filler/binder, showcasing a medium-bodied blend that is flavor-forward. Smokers can expect a Cuban-esque profile, with flavors ranging from pepper spice, to roasted nuts, musty wood, pour-over coffee, earth, and touches of sweet dried fruits. 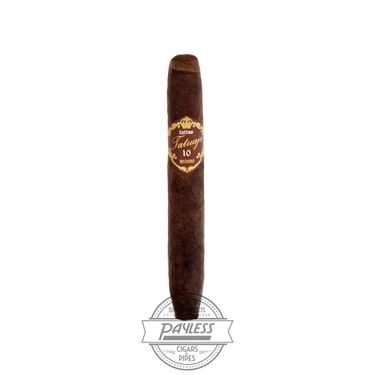