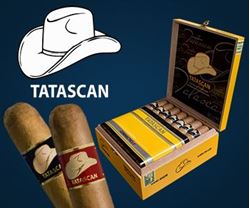 When Julio R. Eiroa and his son Justro ventured out to create their own cigar company in 2016, the family launched JRE Tobacco Company with a straightforward portfolio of three brands: Aladino, Rancho Luna, and Tatascan.

Of course, JRE was far from Julio's first "rodeo," as he's worked closely with tobacco since he was a young boy in Cuba. Later in life, Julio purchased the Camacho brand from Simon Camacho and subsequently turned the Camacho name into one of the most popular brands in the premium cigar market. During this time, Julio began to grow his own Corojo tobacco in Honduras, which has become the backbone of many other ventures from the now-legendary Eiroa family—including JRE Tobacco Company.

Tatascan represents the most affordable cigar from JRE. The name translates to “Head Boss,” honoring Julio's role on the family's farm in the Jamastran Valley of Honduras. Front and center on the cigar's packaging is the imagery of the symbolic hat worn by "the boss." Tatascan by Julio R. Eiroa consists of three blends: a Connecticut-wrapped cigar, a Habano-wrapped cigar, and a value-priced blend known as the Tatascan Yellow Series.

Both the Habano and Connecticut cigars feature a sweetened cap—an old-school style that the Eiroa's have been known to use in the past, as with popular cigars such as Baccarat "The Game." Using the family's famed Authentic Corojo, JRE manages to offer Tatascan at surprisingly low price points, making for one of the most talked-about value cigars amongst cigar enthusiasts.