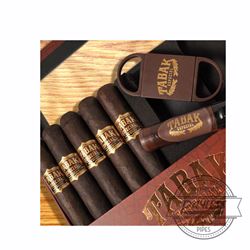 In the same manner that Drew Estate turned the premium cigar world on its collective head with ACID Cigars, they have done the same with Tabak Especial, a finely executed union of coffee and premium tobacco. Tabak Especial traces its roots back to the early 2000s, where Drew Estate and Kahlúa offered a groundbreaking coffee infusion known as Kahlua Cigars Delicioso. When Kahlúa pivoted away from the brand in 2008 after a change of ownership, Drew Estate re-tooled the brand and introduced the Tabak Especial name that coffee and cigar enthusiasts know and love today.

Arguably the best pairing in the world of premium flavor indulgences (coffee and cigars), Drew Estate showcases the combo like none other!