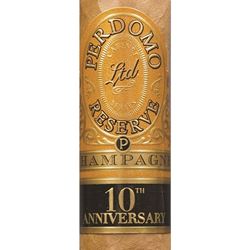 Perdomo Reserve 10th Anniversary Champagne is one of the most well-known brands in the hugely popular stable of cigars from Tabacalera Perdomo. The cigar is known for its magnificently smooth Connecticut Shade wrapper, taking on the crisp, champagne-like color for which the cigar is named.

The cigars are eye-catching, no doubt, being cellophane-wrapped in dark yellow sleeves (again, subliminally associating itself with premium champagne). But it's the select tobaccos used that has won enthusiasts over, becoming one of the world's most popular Connecticut-style cigars. Well-aged Nicaraguan Cuban-seed tobaccos (grown by the Perdomo family) are incorporated throughout the cigar's binder and filler. This premium interior is then topped with the cigar's signature ingredient, a triple-fermented Ecuadorian Connecticut wrapper. With this blend, enthusiasts are treated to a soft and nuanced experience for which the Connecticut style is known, but with an added boost of flavor and complexity from the cigar's Grade A filler ingredients.

Expect a mild/medium body, loaded with more flavors than could be expected from the average Connecticut. White pepper, barnyard hay, buttered crackers, citrus rind, light-roast coffee, honey, and yes, champagne, can all be detected as you make yourself familiar with this classic smoking experience.