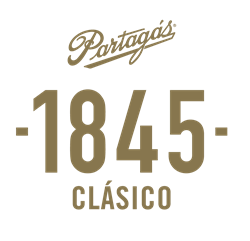 Partagas 1845 Clásico is the reincarnated expression of the original Partagas 1845 cigar from 2012. In 2017, the company overhauled the entire 1845 series (including three unique blends), with modernized packaging and tweaked blends, giving a more consistent and deliberate look/feel and smoking profiles throughout the entire collection.

At the core of the 1845 series is Partagas 1845 Clásico. The cigars feature a reimagined band from Partagas' centuries-old heritage; a design that was first used circa 1900. But most important is the blend itself, as 1845 Clásico utilizes a unique wrapper that has been aged for three months in whiskey barrels! This Ecuadorian Sumatra wrapper is then paired with a Connecticut Broadleaf binder and fillers from Nicaragua (Estelí region) and the Dominican Republic.

The resulting profile is medium in body, offering sweet and creamy flavors of cocoa, coffee, molasses, barbecue, zesty cabinet spices, and a slight bourbon-like buzz through the nostrils.