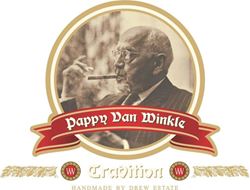 Unless you've been living under a rock for the past ten-plus years, you know that America—scratch that, the world—has been operating under a serious bourbon boom for some time now. At the front of this "boom" is a little gem known as Pappy Van Winkle's Family Reserve (aka "Pappy's"). Each year, typically beginning in October, the precious "nectar of the gods" begins popping up at liquor stores and bars in very limited quantities; so low, in fact, that the suggested retail prices of $100 to $300 bourbons quickly skyrocket into the thousands on secondary markets! It's unquestionably the most sought-after bourbon in the world, one that will make even the stingiest taste buds sing upon contact with the rare liquid...

Pappy Van Winkle Tradition begins with a luscious Ecuadorian Habano Oscuro wrapper; this has been draped over an Indonesian binder and select fillers from Nicaragua and the Dominican Republic. The cigars are rolled at Drew Estate's famed La Gran Fabrica Drew Estate factory in Estelí, with only a small number of cigars going into production each year. Like the bourbon, the Tradition cigars are then released in the fall, coinciding with the annual bourbon release. This is a special smoking experience that no enthusiast/collector should go without. Expect a medium body and a complex palate of citrus, cedar, sweet butter, tangy sourdough bread, black licorice, and toffee sweetness—a match made in heaven when paired with the Van Winkle's bourbon (or any wheated bourbon, for those that aren't lucky enough to score Pappy's own offering). 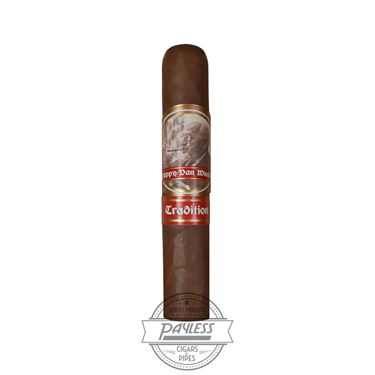