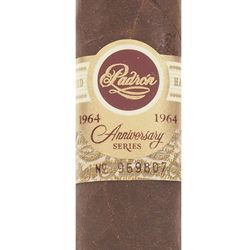 Padrón Cigars is indisputably one of the best premium cigar manufacturers in the world. This designation began more recently than may be expected, with the brand debuting Padrón 1964 Anniversary Series in 1994—during the rise of the great cigar boom of the ‘90s—as a means to celebrate the company’s 30th anniversary.

Padrón had grown significantly since the brand’s humble beginnings, where company patriarch Jose Orlando Padrón began a modest career as a carpenter after being gifted a hammer by a friend. Jose saved enough money carpentering to open a small store front in Miami’s Little Havana neighborhood, producing roughly 200 cigars per day.

By the early ’90s, the Padrón family had established themselves in Nicaragua and Honduras, controlling acres of tobacco and their own factories. And when the United States lifted a trade embargo on Nicaragua in 1990, the Padrón’s were poised to capitalize on the subsequent demand for Nicaragua’s unique flavor properties.

Enter Padrón 1964 Anniversary Series. The Padróns capitalized on their complete vertical integration, assembling a special blend of Nicaraguan tobaccos—each aged for four years prior to rolling. The cigars are then finished in a Natural, sun-grown wrapper or a dark, Maduro wrapper variant. 1964 Anniversary cigars are then box-pressed, allowing the tobaccos to meld together for added complexity and a superior burn. Finally, the 1964 Anniversary Series is bound in special, individually numbered, counterfeit-proof bands to ensure authenticity. The resulting experience is second to none, often described as the best smoking experience the world over.

Padrón Cigars have historically ranked higher than any other cigar brand in Cigar Aficionado’s prestigious “Top 25 Cigars of the Year” list. Padrón 1964 Anniversary Series has placed on the list a whopping four times since 2004 (all ranking within the top five!).