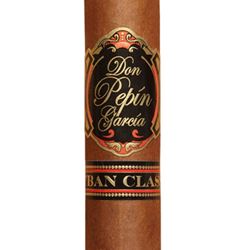 The Don Pepin Garcia Original cigar marks an important milestone in today's premium cigar scene, being the first creation from from the now-legendary Master Blender Don Pepín García after emigrating to the U.S. from Cuba in the early 2000s. Since this time, García's operation has expanded well beyond the small store front he operated in Miami's Little Havana neighborhood, now including three factories throughout Nicaragua and the U.S., as well as being one of the most decorated names in today's industry.

Today, the Don Pepin Garcia brand has expanded to include three smoking experiences, the latest of which being the Don Pepin Garcia Cuban Classic cigar. This blend was the first creation out of the Garcías' massive factory in Estelí, making use of a Nicaraguan-focused blend throughout the binder/filler and being topped with a nut-brown Habano Rosado wrapper.

Q: What does the Don Pepin Garcia Cuban Classic cigar taste like?

A: The Don Pepin Garcia Cuban Classic cigar is medium-full in body and unquestionably classic in character. Cigar fanatics have been returning to this masterpiece since its introduction, beautifully showcasing García's Cuban influence with standout flavors of toasted cedar, fresh soil, rye bread, cocoa, and Pepín signature pepper spice.