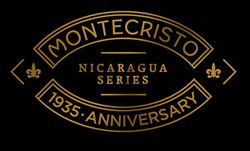 When Alonso Menéndez purchased the Particulares factory and subsequently introduced the Montecristo brand in 1935, becoming the world's most recognized cigar brand was likely not at the top of his priorities. And yet, 85 years later, this has become the fate of Menéndez's first project, holding a special place in the hearts of cigar enthusiasts across the world for nearly a century.

In 2020, parent company Altadis USA set out to honor the brand's legacy with a special anniversary project dubbed Montecristo 1935 Anniversary Nicaragua. Notably, the cigars are not rolled in their original home of Cuba, or even their secondary home of the DR. Instead, Montecristo has been entrusted to the talented hands of Master Blender A.J. Fernández and his northernmost factory (San Lotano), located in Ocotal, Nicaragua. Paying tribute to the blending style of the original Montecristos, Fernández selected tobaccos harvested from a single country. All-Nicaraguan leaves make up the blend, which are said to be strictly sorted and highly aged. Finally, the blend is box-pressed in the traditional Cuban manner, allowing the cigars to press against one another to take shape. This affords an ideal melding of the tobacco blend, translating to subtle nuance for the discerning palate.