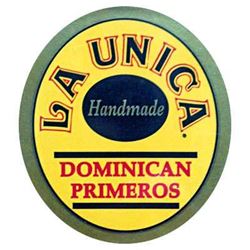 In 1986, a deal was struck between Stanford Newman and Carlos Fuente Sr. (two of the most impactful men in the history of premium cigars), in where J.C. Newman would produce Arturo Fuente's machine-made cigars in Tampa, while Fuente would handle Newman's hand-rolled cigars at their then-new factory in the Dominican Republic. This partnership would later prove to be one of the most significant alliances in cigar history, continuing to this day.

Stanford capitalized on the opportunity by tasking the Fuentes with crafting an affordably priced premium cigar to be packaged in cellophane bundles. At the time, only the less-premium seconds-style cigars were packaged this way, but Stanford's concept would allow for a superior smoking experience at a much more affordable price than the competition. This cigar was titled La Unica Dominican Primeros, a cigar that rose to the level of the number one best-selling bundle brand in the U.S. within six months time!

La Unica cigars are hand-crafted by the legendary Fuente family at their prized Tabacalera A. Fuente factory in the DR to this day. The cigars boast five-year aged tobaccos, allowing for the signature depth and smoothness time and again. The recipe includes Dominican leaves throughout the binder and filler, which are finalized in either a Connecticut Shade (Natural) or Connecticut Broadleaf (Maduro) wrapper style. And while La Unica has since been updated to box-style packaging, the world-famous smooth character remains, offering a dependable experience without fail.