The story of Ernesto Perez-Carrillo has become one of legend within the premium cigar scene, a tale of one man that built a cigar empire from his family's humble operation in Miami's Little Havana neighborhood. It was the early '90s and Ernesto had become known in small circles for his La Gloria Cubana brand. But when Cigar Aficionado debuted with their first issue, the LGC name received high praise and his family's small setup was suddenly placed front and center; they couldn't keep up with demand. Ernesto sold the company to General Cigar in 1999 and went on to work under the new ownership for the next decade. In 2009 Carrillo left General Cigar, setting out to reclaim his title as "the godfather of boutique cigars" by once again establishing his own factory—this time teaming with his two children, settling in the Dominican Republic. This was only the beginning for EPC Cigar Company...

In 2014, E.P. Carrillo debuted their most premium blend to date, celebrating the company's fifth anniversary. The cigar is known as La Historia, a special cigar that was made to honor the legacy of the Carrillo family. Each size in the Perez-Carrillo La Historia lineup is named after a member of the family, with a particular emphasis on the strong women, such as Carrillo's grandmother.

La Historia makes use of some of the finest tobaccos at the Carrillo's disposal. The blend begins with an all-Nicaraguan filler, which is bound in an Ecuadorian binder and finished with a luscious Mexican San Andrés wrapper. The end result is a superb smoking experience—a cigar that has been hailed as one of Carrillo's finest in his 40-year career.

EPC La Historia received the high honor of Cigar Aficionado's No. 2 Cigar of the Year in 2014, earning an almost-unheard-of 95-point rating. 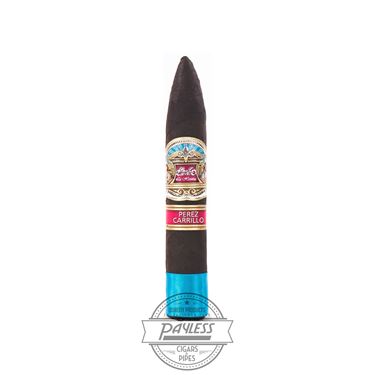