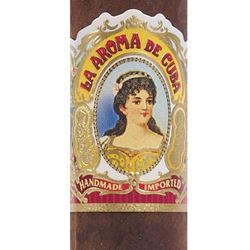 La Aroma de Cuba represents the Nicaraguan side of Ashton Cigars, being crafted by the legendary García family at their Estelí-based My Father Cigars factory. Curious about their non-Nicaraguan cigars? Well, that would be handled by their close friends in the DR — Arturo Fuente. You heard that right, whether Nicaragua or Dominican, Ashton offers nothing but the absolute best!

For La Aroma de Cuba, the cigars were brought about in 2002, with Ashton reviving an original Cuban brand from the late 1800s. The revived LADC was originally a Honduran blend, but was retooled in 2009 when Ashton made the discerning move to bring production to Nicaragua, partnering with the up-and-coming José “Don Pepín” García to truly do the historic brand justice. Of course, cigar enthusiasts know the rest of the story, as the García family has become one of the most respected manufacturers in the industry, and La Aroma de Cuba has followed suit.

With the García’s own Nicaraguan tobaccos at the cigar’s core (binder/filler), La Aroma de Cuba is then draped in a dark and gritty Connecticut Broadleaf Maduro wrapper. The resulting combination produces a medium body with medium/full flavors that highlight the cigar’s Broadleaf wrapper; known for its raw and earthy tendencies. This is an exemplar smoking experience for the maduro fanatic, showcasing flavors of wet earth, chocolate, table cream, cedar wood, sweet brown sugar, and a touch of spice.