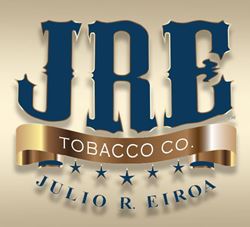 But JRE had bigger plans, and the father-son duo ventured out on their own in 2016, featuring a solid lineup of three cigar brands: Aladino (most premium), Rancho Luna (mid-grade), and Tatascan (value-priced). The cigars intentionally forgo fancy packaging and bells and whistles, instead focusing entirely on Julio's famed Corojo and Habano tobacco from his farm in the Jamastran Valley of Honduras.

Eiroa's prized possession is his Authentic Corojo tobacco—a seed he began cultivation in the mid-1990s, when he owned Camacho Cigars. This seed is essentially an authentic strain from Cuba's heyday (late '40s through early '60s), which he has carefully cultivated to smoke like Cuban cigars from this era. Benefitting from complete vertical integration, JRE Tobacco Co. is able to control the entire process, from seed to smoke, allowing cigar enthusiasts the chance to smoke something pure, something genuine, something fantastic.