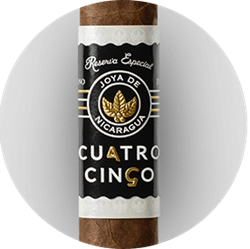 Joya de Nicaragua Cuatro Cinco Reserva Especial traces its roots back to 2008, when Joya de Nicaragua began aging select tobaccos in spent white oak barrels that were formerly used to age rum. These leaves were first used in a limited-edition cigar—Cuatro Cinco Edición Limitada—which was crafted in commemoration of the company's milestone 45th anniversary in 2013. The cigar proved a hit, and Joya made the decision to bring the blend (or a slightly tweaked version of it) back to its lineup on a full-time basis.

This regular-production rendition of the blend is dubbed Cuatro Cinco Reserva Especial, being the first release in Joya de Nicaragua's top-tier Obras Maestras series (joined by the Cinco Décadas and Número Uno cigars). As with the original cigar, the Cuatro Cinco centers around Grade-A, five-year-aged Nicaraguan ligero leaves that have been aged within vintage oak barrels. These leaves are joined by a Dominican binder and an oily Nicaraguan Criollo wrapper. The result is a medium-full body and deep, highly flavorful characteristics of rich oak, orange peel, cocoa, cinnamon, and dark and jammy stone fruit through the finish.