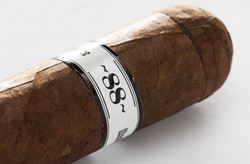 This is it folks, the cigar that started it all! And by all, we mean Illusione — mainstay for the craft cigar enthusiast. It was 2006 that Dion Giolito, owner of a small cigar shop in Reno, introduced his first cigar as a house blend for his customers. The cigar was a robusto that was simply titled “88,” alluding to the year he returned to Reno, Nevada.

88 was followed by other sizes, each receiving equally cryptic names such as mj12, cg:4, and mk — all contained within the Illusione name. As further sizes were introduced, Giolito eventually dubbed the entire series the “Original Documents.” Unlike nearly every other brand on the market, Illusione Original Documents cigars bear neither the Illusione or Original Documents name on the band — instead showcasing a simplistic, thin band that only reads each individual size’s name. And because Illusione centers around conspiracies, each cigar’s name can be deciphered to reveal hidden messages.

The Original Documents blend is built from the legendary AGANORSA tobccos, focusing on Nicaraguan Criollo ’98 and Corojo ’99 leaves in the filler and binder. The finishing touch is a AAA-Grade Corojo Rosado wrapper leaf, making for a medium to full-bodied blend for the connoisseur. And while many companies claim to be “boutique,” Illusione is a truly authentic representation of the style; taking their time to only include the proper tobaccos for every vitola crafted. In this way, Illusione Original Documents cigars are only available in small batches throughout the year. When the cigars become available, you can rest assured the smoking experience is of the highest quality.