Operating as one of the world's best-known brands, Hoyo de Monterrey traces its roots back to 1831 Cuba. The name is Spanish for The Hole of Monterrey, describing the concave landscape where the cigar's tobaccos were harvested. This area was regarded as one of the best growing regions for Cuban tobacco, launching the Hoyo marca into the mainstream for generations to follow.

As with nearly all other pre-Revolution Cuban marcas, the cigar's manufacturers brought the name out of Cuba in order to escape seizure by the government. This caused the split of Hoyo de Monterrey, which has been produced in both Cuba and Honduras ever since.

The Hoyo de Monterrey Excalibur Black cigar is handcrafted in Honduras, making use of a fuller-bodied blend than its predecessors. This is achieved through the use of a dark Connecticut Broadleaf maduro wrapper, Ecuadorian Sumatra binder, and fillers from Nicaragua and Honduras.

What does the Hoyo de Monterrey Excalibur Black cigar taste like?

The Hoyo de Monterrey Excalibur Black cigar is dark and mysterious in character, opening up with a medium-full intensity and gritty flavors of earth, black pepper, honey wheat bread, rich chocolate, and touches of black licorice. 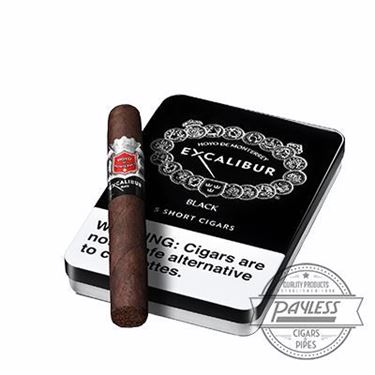