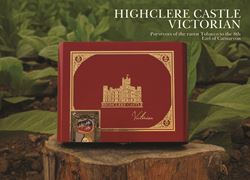 In 2017, cigar hobbyists were treated to one of the most unexpected collaborations imaginable, as Nick Melillo (owner of Foundation Cigar Co.) partnered with George Carnavon (8th Earl of Carnarvon and current owner of Highclere Castle) for an ultra-premium smoking experience of royal proportions. Drawing from the historic Highclere Castle (located in Hampshire, England), Foundation and Highclere Castle Cigar Co. sought to recreate a smoking experience on par with the cigars that were enjoyed at the castle during the 19th and early 20th centuries.

The cigars proved popular with smoking enthusiasts, and the Highclere Castle Victorian was crafted in response. Differing from the mild and nuanced tendencies of the original, Highclere Castle Victorian turns to a darker, more full-bodied experience. The blend was hand-selected by Melillo at the famed Tabacalera A.J. Fernandez factory in Estelí, Nicaragua, featuring a dark, high-priming Ecuadorian Habano maduro wrapper as the cigar's signature ingredient. This leaf is secured over a Brazilian Mata Fina binder (the same used in the original Highclere Castle cigar) and all-Nicaraguan filler components.

Highclere Castle Victorian is as regal and complex as the original Highclere cigar, only the intensity dial has been cranked up by more than a few notches! The Victorian assaults the palate upon ignition, unloading with heady flavors of black pepper, earth, sweet maple, rain-soaked oak, raw cocoa, freshly roasted coffee beans, and hazelnut through the finish.