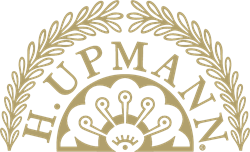 Hermann Dietrich Upmann was a German banker that first arrived in Cuba in 1843, establishing a banking business aimed at the local tobacco brokers and manufacturers. But he was soon enamored with premium cigars and purchased a nearby cigar factory, thus establishing the H. Upmann brand in 1844.

Of course, the Upmann name continues to this day, operating as one of the oldest and longest-running cigar brands ever produced. During the brand's 175th anniversary year (2019), parent company, Altadis USA, introduced H. Upmann Herman’s Batch in commemoration of the man himself. In an effort to re-envision Hermann's first cigar creations, Altadis' head of product capability, Rafael Nodal, partnered with the famed Grupo de Maestros team of cigar artisans. Together, a high-grade blend was crafted at the Tabacalera de Garcia factory in the Dominican Republic.

Upmann Herman’s Batch incorporates fillers of the Dominican Republic and the Condega and Estelí regions of Nicaragua. These leaves are bound in a Dominican leaf and finalized in a special Ecuadorian Habano wrapper that is said to be double-fermented and aged for four years. The end result is surely a smoke that Upmann himself would've been proud to have his name represent, bringing the cigar enthusiast a bouquet of soft and nuanced complexities. This includes highlight flavors of Spanish cedar, cinnamon, aromatic cabinet spices, leather, and sweet brown sugar.