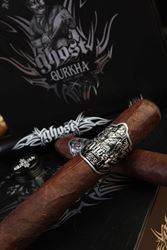 Gurkha Cigars was founded in the late 1980s by Kaizad Hansotia. The story goes that Hansotia was on vacation and a man was selling cigars on the beach; he bought the entire stock (and rights to the company name) for $150 and began to sell them in his duty-free stores worldwide. The cigars sold like crazy, hitting the market during the beginning of the great cigar boom, and that's how the Gurkha began was born.

After a few years of selling exclusively at duty-free stores, Gurkha began to expand its portfolio and started to focus on limited releases and rare tobaccos. Over time, Gurkha became known for their luxury products, in some instances selling cigars for hundreds or even thousands of dollars!

Thankfully for the consumer, the Gurkha Ghost is not one of the aforementioned expensive cigars! This attractive stogie is geared towards the everyday cigar enthusiast, offering big flavors at modest price points. The cigar is quick to catch the eye because it features a holographic band that displays the standard Gurkha soldier emblazoned on it. This striking cigar and cigar band is accompanied by a stunning box to display that is worthy of the Gurkha name, which is often known for its opulent presentations.

Gurkha Ghost has a Brazilian Maduro wrapper that encases an aged Criollo '98 binder and filler tobaccos from the Dominican Republic. Enthusiasts will be treated to aromas of black licorice, leather, and pepper; upon lighting, the dark, rich cigar produces a large volume of smoke. Flavors abound with cocoa, pepper, a sweet and creamy buttered toast, and a finish of caramel and nutmeg. Forget "seeing is believing," smoking is truly believing in the Gurkha Ghost!