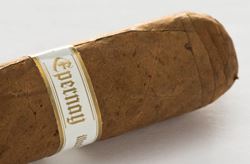 The Illusione Epernay cigar debuted in 2009 as a regular-production spinoff of the Illusione ~eccj~ cigar of 2008. The name stems from the Épernay region of France, and company owner, Dion Giolito, blended the cigar to pair well with the town’s bright and effervescent Champagne.

Epernay is unique within Illusione's portfolio, being the company's last remaining cigar produced in Honduras at the Raíces Cubanas factory (the rest are now handled at Aganorsa Leaf's TABSA facility in Nicaragua). This cigar holds a special place in the hearts of many of the most seasoned cigar smokers in the hobby, known for its elegant and sophisticated smoking profile. This is brought on through a carefully calculated tobacco recipe, showcasing Mr. Giolito's sharp palate, which is sometimes said to be the best in the industry.

For starters, the Illusione Epernay cigar is rolled without the use of ligero-priming tobacco; this is a leaf that boasts strong flavor and strength, yet can overwhelm a blend if not put to proper use. Additionally, the cigar showcases a special selection of AAA-Grade Nicaraguan Corojo ’99 Cafe Rosado for the wrapper, allowing for an uncharacteristically smooth and nuanced experience when compared to conventional Corojo cigars. The remainder of the blend is Nicaraguan as well, including Criollo '98 and Corojo '99-seed tobaccos.

The Epernay cigar is Illusione's most decorated release, scoring countless 90-plus ratings and ranking among Cigar Aficionado's Top 25 Cigars of the Year on multiple occasions (the highest being the No. 3 spot in 2011).

The Epernay cigar tastes as smooth as its name sounds... This modern classic disregards the modern trend toward pounding strength, instead focusing on finesse and layered complexity. Expect a mild to medium body and standout flavors of clean cedar, graham cracker, buttered nuts, almond butter, and light-roast coffee beans.