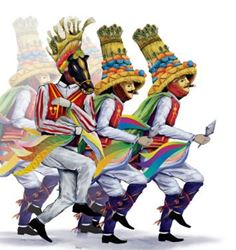 El Güegüense is pronounced “el way-when-say,” which translates to “The Wise Man.” The term signifies a historic folklore masterpiece for Nicaragua; a combination of music, dance and theater that is generally regarded as Latin America’s most distinctive colonial-era work.

The cigars are produced at the famed TABSA factory in Estelí, Nicaragua. The blend is a Nicaraguan puro, using a Corojo 99 wrapper from Jalapa, a Corojo 99 binder from Jalapa, and Corojo 99 and Criollo 98 fillers of Jalapa & Estelí. The resulting smoking experience is medium-bodied and full-flavored, bringing chewy notes of chocolate, cabinet spices, butterscotch, sweet toffee, and aromatic floral nuances.