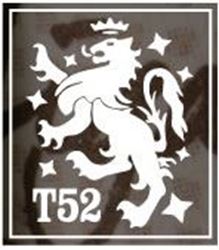 The famed Liga Privada T52 by Drew Estate launched in 2009 as the anticipated followup to the now-legendary Liga Privada No. 9 cigar. Both cigars were themed around offering smokers a chance to experience the superior performance of a cigar factory's private blends (hence the name, Liga Privada, or Private Blend). This theme carries over to the cigars' simplistic bands, which are made to resemble the plain white bands seen on factory floors, where handwritten notes are jotted down to differentiate one blend from the next.

Liga Privada T52 can be thought of as the yin to the Liga Privada No. 9's yan, veering from the maduro-wrapped No. 9 with an especially rich and hearty Habano wrapper from the Connecticut River Valley of the U.S. This leaf is truly something special, being an heirloom seed brought from Cuba to Connecticut in roughly the late 1800s. Grown on a select farm, the leaves are stalk-cut and cured, allowing the leaves to absorb added nutrients from the plant as they cure. The T52 leaf then undergoes heavy fermentation, producing a robust, oily, highly flavorful tobacco, being the star ingredient of the overall blend. This wrapper surrounds a Brazilian Mata Fina binder and filler of Nicaragua and Honduras. This combined recipe has been acclaimed as one of the finest smoking experiences of the modern era, producing thick plumes of smoke and highly flavorful characteristics of white pepper, rain-soaked oak, rich coffee, fruit-flavored hard candy, and similarly sweet chocolates.