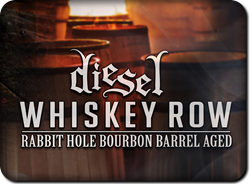 Like Diesel, which is a relatively new brand in the realm of premium cigars, Rabbit Hole is a young contender in the whiskey scene, known for its tenacious flavor profiles that ride against the grain of traditional customs. In this clashing of industries, A.J. has concocted his own, proprietary mechanism for securing tobacco and aging/fermenting it within the used whiskey barrels. The process began in 2016, with the final product making its way to market in 2018.

Diesel Whiskey Row features Nicaraguan tobaccos from three of the country's four major growing regions: Ometepe, Condega and Jalapa, each aged between five and eight years. This filler recipe is bound in the bourbon-barrel-aged Mexican San Andrés leaf that gives the project its namesake. Finally, a five-year-aged Ecuadorian Habano leaf ties the complete recipe together, offering a spicy-sweet smoking experience that has to be experienced first-hand to be believed. The cigars show a medium body, focusing all the attention on sheer flavor. Expect an exciting amalgamation of Nicaraguan spice, heavy oak, cinnamon, camp fire aromas, and a sweet, vanilla-bourbon buzz through the nostrils. The cigars do not taste infused, embodying a well-aged premium cigar with added complexities from the matured oak.

This is Diesel like you've never seen it before!