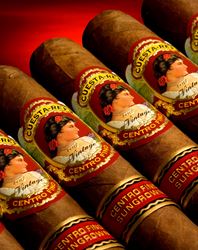 This cigar sets itself apart through the use of a sun-grown Sumatra wrapper from the Quevedo region of Equador. This leaf is compared to the center cut of a fine steak, being harvested from the center of the plant (hence the name, Centro Fino). This leaf is joined by all-Dominican binder/fillers, including five-year aged ligero tobacco, further contributing to the cigar's rich smoking characteristics.

What does the Cuesta-Rey Centro Fino Sungrown cigar taste like?

Cuesta-Rey Centro Fino Sungrown cigar has been a go-to favorite for cigar fanatics for decades. This is due to the cigar's dependable construction, affordable price points, and hearty flavor that the seasoned palate craves. Expect a medium-full body and fiery flavors of red pepper, toasted cedar, cinnamon, and roasted nuts.