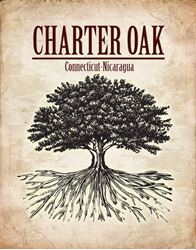 Charter Oak by Foundation Cigar Company carries with it an unusual tale, dating back long before the founding of America itself. The cigar is named after the legendary Hartford, Connecticut-based white oak tree of the same name. The tree, being an especially large specimen, is said to have been planted in the 12th century, eventually being toppled in 1856 by a severe storm. During its exceptionally long life, Charter Oak was once used by Native Americans, where they would hold council under its massive branches. Later, King Charles II issued a Royal Charter to the Connecticut settlers, granting them an unusual degree of autonomy. Charles' successor, King James II, later attempted to retrieve the charter unsuccessfully, as it was hidden within the great Charter Oak—a fascinating symbol of American independence.

As Nick Melillo, founder of Foundation Cigar Co., is a native to the Connecticut region, operating Foundation out of Windsor, it made perfect sense to honor the local Charter Oak with this cigar. Further tying into the theme, Charter Oak cigars make use of Connecticut Shade (light shade) and Connecticut Broadleaf (maduro) wrappers, both of which have been brought to fame by the sought-after Connecticut River Valley growing region. These wrappers have since been joined by a third Habano variant. Best of all, in keeping with the old-school style of Connecticut Broadleaf's historically affordable nature, Charter Oak cigars are aimed at the budget market, with prices ranging from $4 to $6!