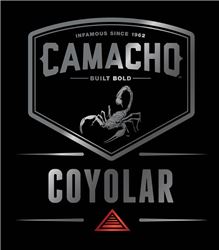 The Camacho Coyolar cigar is the bold incarnation from Camacho's past, first launching onto the premium cigar scene in 2005. The brand was later retired, as Camacho consolidated its portfolio in 2013, though it was eventually summoned from the depths of Camacho's vaults in 2018.

Coyolar derives its name from the tobacco farm where the cigar's leaves are harvested, being located near the border of Nicaragua and Honduras. Unique to the Coyolar cigar, this farm produces the leaves for the entirety of the blend, being described as a "single farm vintage" recipe. Additionally, the Camacho Coyolar cigar sets itself apart in the Camacho lineup through the tobacco varietals chosen. Where virtually all Camacho cigars make use of the company's prized Original Corojo, the Coyolar opts for Criollo seed throughout the wrapper, binder, and filler.

Cigar enthusiasts have long praised the Camacho Coyolar cigar for being among the fullest-bodied experiences within Camacho's already-bold portfolio. Criollo tobacco is placed on center stage, offering an intense smoking character for the seasoned palate. This includes heavy hitting flavors of black pepper, fiery earth, dark cocoa, and bittersweet espresso.