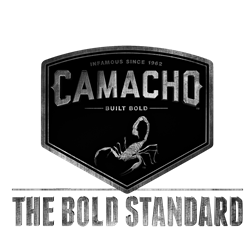 Camacho Connecticut BXP takes one of the best-selling Camacho cigars (Camacho Connecticut), swaps out a few parts under the hood, and adds a new body kit, making for a fun and sporty twist on an old favorite! In cigar terms, what we're saying is that Camacho has added Pennsylvania Broadleaf to the filler and given the cigar a sexy box-press shape!

In an industry where the latest and greatest is in constant demand, sometimes it's nice to find new smoking experiences in the form of tried 'n true favorites. Such is the case with Camacho Connecticut BXP. This tasty nugget boasts a gorgeous Ecuadorian Connecticut wrapper, secured atop Camacho's signature Honduran Original Corojo in the binder, as well as Dominican leaves (also proprietary) in the filler. As a finishing touch, Pennsylvania Broadleaf has also been added to the filler, boosting the overall flavor output of the blend. The cigars are then box-pressed (hence the BXP name), allowing the complete tobacco concoction to marry together to perfection before the cigar's end journey—your humidor and ash tray!