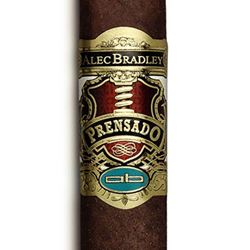 Alec Bradley debuted in 1996, during the peak of the great cigar boom. This was a time when new manufacturers flooded the market, only to come crashing down in the next few years. But the crash revealed those that were the “real deal,” those that were willing to go the extra mile and craft quality product that stood the test of time. This included Alec Bradley (AB).

And while AB held strong, moving from a brand that sold cigars for the golf course to a legitimate name found in premium humidors, it wasn’t until 2011 that the company really skyrocketed. This was due to the monumental nod as Cigar Aficionado’s No. 1 Cigar of the Year in 2011 for the Alec Bradley Prensado (including an impressive 96-point rating).

Prensado was first released in 2009, making use of a unique Honduran Trojes Corojo wrapper that is as smooth as suede. The blend is rounded out with a Nicaraguan binder and fillers of Nicaragua and Honduras. In addition, AB partnered with the famed Raices Cubanas factory in Honduras for production. The end result is an atypical profile of tangy sourdough, citrus, chocolate, exotic spices, and brown sugar sweetness.