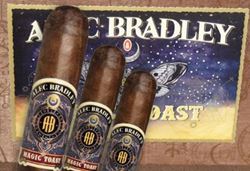 The inspiration for the Alec Bradley Magic Toast is a tale that sounds like folklore, as all good cigar stories do. As legend has it, Alan Rubin, the founder of Alec Bradley, was in a field full of tobacco, under the cover of night. He sifted through the leaves with a flashlight and knew in his heart that a special project would emerge from this very crop. Alan and his associates cracked open a bottle of whiskey and made a toast and thus the Magic Toast was born.

At IPCPR in 2018 (the cigar industry's annual trade show), Alec Bradley had a secret release planned; while such secrecy is not all that uncommon, the release that would eventually be revealed as the Magic Toast debuted to some serious hype. The Alec Bradley Magic Toast has a Honduran wrapper and a binder that is both Nicaraguan and Honduran. The use of a double binder is something that Alec Bradley has become known for, as well as their use of primarily Nicaraguan and Honduran Tobaccos. Unsurprisingly, the Magic Toast is rolled in Danlí, Honduras, at Fabrica de Tabacos Raices Cubanas S. de R.L. Magic Toast's special recipe results in a cigar that is medium to medium-plus in body and strength, showing lively flavors of wet soil, zesty spice, loads of black pepper, mineral, gamey meats, and dark chocolate.